A couple of weeks ago, I got to work on a very exciting residency at a small integrated-arts school in Hope, Maine. I guided the students to create “moveable poems,” and my fellow Maine Teaching Artist Leader Tim Christensen helped them create pieces of pottery on which to write the poems! At the end, we all contributed to a group blog post about the residency, which you can read here. I am just going to include my part from that blog, which is as follows:

At the close of my two days teaching at Sweetland Arts School, the 12 children with whom I’d been working asked me to sit in the center of a rug. Standing around me, they joined hands and began to sing. The song was new to them, so there were a few stops and starts, but they got there in the end. This is what they sang to me, twice:

In this circle deep peace

In this circle no fear

In this circle Great Happiness

In this circle safety.

This moment felt completely, beautifully appropriate for my experience on the residency. It wasn’t just that the song used anaphora (repeated phrases) to create its structure, which was the technique I had helped them learn for the poems they wrote with me. It was that, through their song and their spontaneous desire to give it to me, they were teaching me something, as they and their school had done all residency. 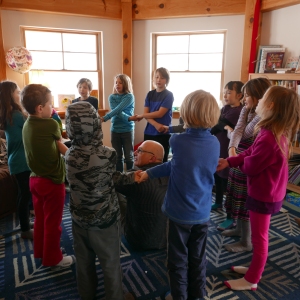 During the previous two days, I had sometimes felt the opposite of deep peace, great happiness, and safety: I had feared that my whole work at the school was going awry. I am not now sure why I felt this way, except that panic and a feeling of ineluctable disaster are often a part of a creative process. But by the students’ continued steady efforts, and I suppose mine too, things had turned out right in the end. Their poems collectively were funny, tender, deeply personal, wildly inventive, and above all wonderful to hear all read out one after another, as they had just done.

When I sat in the middle of their voices, I knew that they had given me this moment to teach me that I need not have feared: if you keep working, wisely and with good heart, your projects will succeed.

So what I will take away from this residency is a feeling of gratitude, not for what I taught, but for what I learned. I learned that a vision, to create a school where the arts are not peripheral but central, can be made to happen, by Lindsay and her husband Chris. I learned that children who are skillfully supported to trust their own decision-making and imaginations can invent the most marvelous things, such as the spontaneous class play involving sheep and blades of grass that was scripted and performed by the grade 1-3 group, to illustrate concepts of division and remainders, based on a poem they’d made about the number 17. I learned that there is more scope in my own teaching to allow students to make their own choices about how they grow their writing. And I learned a little, just a little, about what can be achieved if we step back, let go of control, and trust the kids, the process, and the art.